From our partners at TMACC we are sharing this event

November 7 at The Desmond Hotel – Below is the URL for the upcoming EV Summit.

SEI is sharing an article from eeditioninquirer.com. Going Solar. What you should know before getting rooftop panels installed.

SEI wants to share this Philadelphia Inquirerer article with you!

Going Solar: What you should know before getting rooftop panels installed.

SEI has training grant dollars to partially reimburse companies for training their employees for courses that are scheduled from January 1, 2021 – June 15, 2021. Go to https://smartenergypa.org/initiatives/training-funds/ to find out more.

WHAT IS A SOLAR OPEN HOUSE?

This event is free and open to the public – everyone is welcome to attend. Whether you are a solar owner, completely new to solar, or somewhere in between – this event is for you. Stop by for a few or stay for a while!

Locations Saturday October 19 will be in Kimberton, West Chester, Downingtown and Coatesville.  Check the website for exact times and locations.

Learn more, RSVP, and sign up here to receive Updates and News on Solar Power. https://www.nationalsolartour.org/localtours/chester-county/ 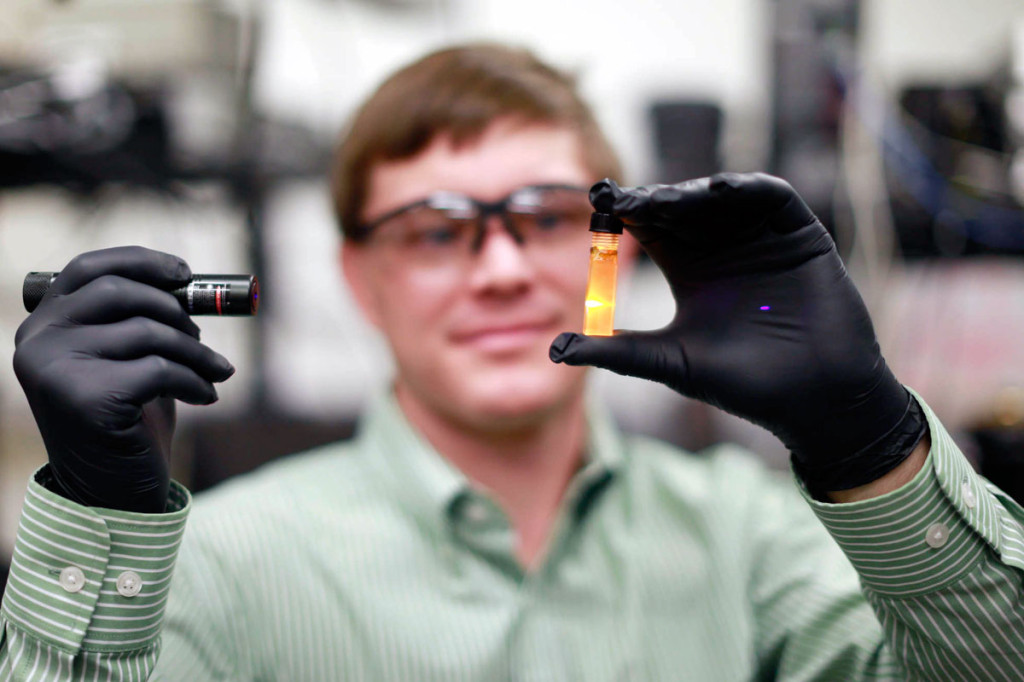 Solar panels accounted for one-third of all new electricity generation installed in the United States in 2014, up from just 10 percent two years earlier.

With interest expected to keep rising, many research groups are on the hunt for ways to boost efficiency.

Among them is a team at the University of Delaware, which is developing materials to harness portions of the sun’s spectrum that in today’s conventional solar panels are largely wasted.

The key is a property of a panel’s semiconductor material called the band gap, an electronic hurdle of sorts. Light particles – photons – with enough energy to clear the bar are converted into electricity, while those with lower energy are lost mostly as heat.

The Delaware researchers believe their materials would combine the energy from two low-energy particles to make one photon with enough energy to clear the hurdle.

“We call it the ratchet,” said Delaware’s Matt Doty, an associate professor of materials science and engineering.

It is a perennial industry guessing game to predict which of the next-generation technologies can be made cheaply enough to be worth putting on rooftops.

Solar installations benefit from an investment tax credit that is set to expire next year, though Congress is considering an extension. In an analysis this month, Deloitte Center for Energy Solutions said that true “grid parity,” defined as cost-competitiveness without subsidies, is still years away in most of the country.

But in Pennsylvania, utility-scale solar plants could be competitive with other new power-plant installations as soon as next year, because wholesale power prices here are relatively high, the analysis found.

Doty, along with Delaware colleague Joshua Zide and others, wants to push the technology even further by taking a new stab at an old idea.

Previous efforts to combine the energy from low-energy photons – a concept called photon upconversion – have resulted in poor efficiency.

The Delaware team is tackling the problem by fabricating high-purity, ultrathin films of gallium and indium compounds, deposited in precise amounts with a process called molecular beam epitaxy.

The process is carried out in a vacuum, inside a silvery machine where the pressure is less than one-trillionth that of the air on the Earth’s surface, said Zide, an associate professor of materials science and engineering at Delaware.

Numerical models suggest that solar panels made with this method and configuration of compounds could, in theory, achieve efficiencies in the high-30 percent range, Doty said. Conventional silicon-based solar panels, by comparison, are generally no more than 22 percent efficient.

But the molecular-beam method is expensive, so at the same time Delaware is experimenting with another way of combining the energy from low-energy photons that is cheaper, though not as efficient.

This parallel approach involves creating a solution of tailored nanoparticles that could be applied to the back of solar panels like paint.

The paint might boost conventional panel efficiency by 3 percentage points, to 25 percent, or more, Doty hopes. 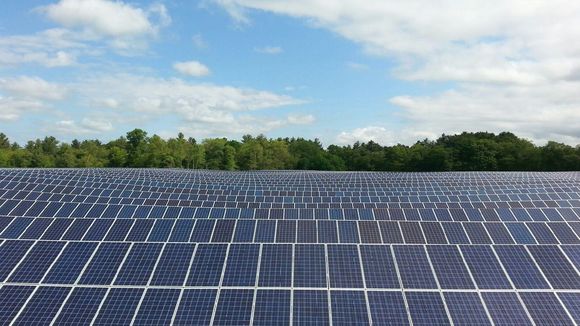 In an attempt to improve its carbon footprint, Allen Harim Foods has decided to go green. The poultry producer broke ground on Monday near its Harbeson processing plant, on what is likely to become one of the largest solar farms in Delaware.

To achieve this, the company has signed a 20-year deal with project developer SolarSense, an affiliate of Berwyn based Alternative Energy Development Group. As per the lease agreement, Allen Harim Foods will purchase the 2.3 million kilowatts hours of power that are expected to be produced by the solar farm each year. This should reduce the company’s carbon dioxide emissions by around 1,616 metric tons.

The plant is expected to receive around 11% of its energy from a 1.57-megawatt photovoltaic solar panel array and Chris Fraga, the CEO of Alternative Energy Development Group, said that “this project is projected to save Allen Harim around 16 percent in energy costs during the first year of operation.”

The solar array is expected to stretch the length of four and a half football fields on a 6-acre parcel near Allen Harim’s Harbeson plant off Harbeson Road, with construction planned to last 3 months, barring unexpected weather issues.

“This project is in line with our strategic goals of environmental sustainability moving forward in Delaware,” said Allen Harim CEO, Steve Evans. He added “we’re trying to be competitive and one of the ways to be competitive is what’s your cost and anything you can do to try to get cost reductions and change your mix, all those things help us sustain ourselves long term.” 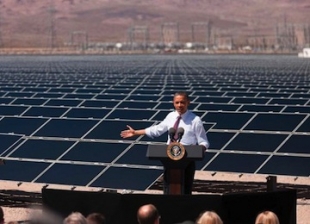 Some barriers to popularizing the property-assessed clean energy (PACE) program across the U.S. were cleared today with an announcement made by President Obama at the National Clean Energy Summit in Las Vegas, Nevada.

PACE loan programs let homeowners finance energy-efficiency upgrades, such as adding insulation and water savings measures or installing energy-efficient windows or solar panels, to be paid back as a line item on the homeowner’s property tax bill. This lowers the risk for lenders and owners and can potentially build a much larger energy-efficiency market.

But PACE obligations enjoy first-lien status in most states, making municipalities first in line to be repaid — ahead of the mortgage agencies, in case of default — and mortgage agencies don’t like that.

So today, the White House and the Federal Housing Administration (FHA) established a new PACE guidance aiming to “remove existing barriers and accelerate the use of PACE financing for single-family housing.” (The FHA guidance letter can be found here.)

According to the California Association of Realtors, the FHA guidance will require PACE liens to be subordinate to FHA single-family first-mortgage financing,

As Cisco DeVries, CEO of Renew Financial, notes in a release, “The FHA, which insures over 20 percent of new mortgage originations in the United States, outlined a set of principles associated with their new guidance — including allowing PACE financing to transfer between owners during the sale of the home if the PACE lien can be subordinated during a foreclosure.”

In a statement from today, Ed Golding, head of the FHA, wrote, “PACE allows homeowners to benefit from the improvements immediately and spread the cost over time. When the property is sold, the PACE loan may transfer to the next owner, who is responsible for repaying the loan. The ability to transfer the loan to the new owner allows for both the payment and the value of the retrofit to be transferred from one owner to the next.”

California completed about $500 million in residential PACE projects for approximately 25,000 homes in 2014, according to PACENow, a nonprofit that promotes the PACE model.

We’re thrilled to see Radnor-based Community Energy as recognized by Keystone Edge as a creator of high-quality green jobs! 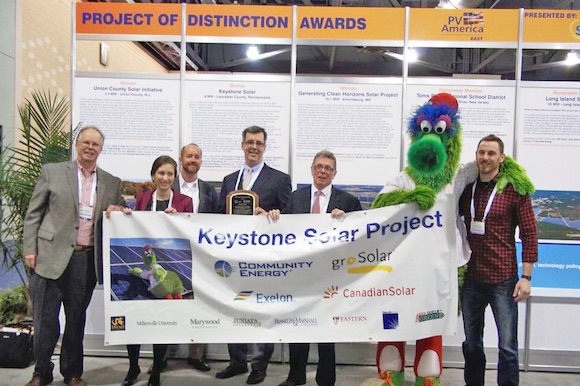 Some of the highest paying and most exciting jobs being created in the current economy are in the areas of high technology, renewable energy and medical devices. Fortunately, those are also sectors experiencing propulsive growth in Pennsylvania. Whether the companies are startups or long-established enterprises, these employers are driving the demand for an educated, tech-savvy workforce.

We talked to three companies from across the state to find out exactly how they create those high-value jobs. All are Ben Franklin Technology Partners portfolio companies and all hope to employ Pennsylvanians for years to come.

Founded in 1999 by R. Brent Alderfer, CEO, and Eric Blank, Executive Vice President, Community Energy Inc. (CEI) initially developed a market for wind energy. In 2006, the partners sold the company to Iberdrola Renewables of Spain, the largest renewable energy company in the world. But in 2009, they bought it back and turned their attention to solar energy development.

According to Tom Tuffey, the company’s vice president of project services, as of this year CEI has produced an estimated 350 megawatts of solar energy; by the end of next year it will be close to 700 megawatts — roughly the amount produced by a small nuclear power plant (five megawatts is enough for about 2,000 people). 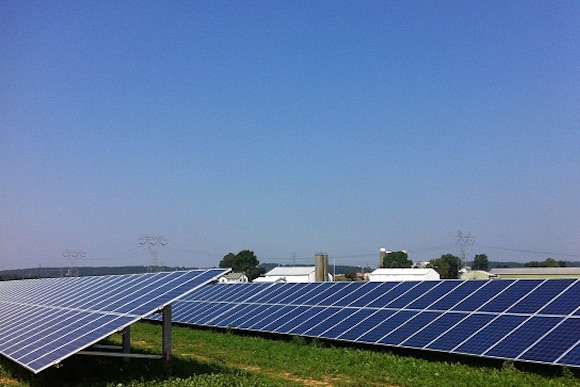 CEI has built utility grade solar projects large and small all over the country; they are set to begin a 120-megawatt 1,000-acre project in Colorado, which will be the largest of its kind east of the Rocky Mountains.

The current staff numbers about three dozen, all professionals ranging in age from 30s to late 60s, including engineers, financial experts, attorneys and office staff. The company, which has received support from Ben Franklin Technology Partners of Southeastern PA, contracts with EPC (engineering procurement in construction) firms to do the actual building of the projects, which usually involves 60 or more tradespeople for three to four months.

According to Tuffey, the company recently hired someone to staff the trading desk — they keep an eye on the current prices of renewable energy — and just started a new engineer last week. Prior to that, CEI hired a senior developer to oversee the projects, from acquiring land to interconnecting with the power grid, a complex process.

“We’re probably the leading solar developer on the East Coast,” he says. “To find people with the depth of experience we require is a challenge, but we’re very well known in the industry, so people also come our way unsolicited. Ours is a very narrow niche world and we’re a well known entity in that world.”

He adds that there isn’t much turnover — people seem to enjoy working at CEI.

“We’re hot now, so people like a company that’s doing well,” explains Tuffey. “And everyone has access to the management team.”